Home away from home

Online platforms for budget hotels in India have always been in the news. OYO Rooms is the ‘oldest startup’ in this space which was started as Oravel in 2011 by the then 18-year-old Ritesh Agarwal. 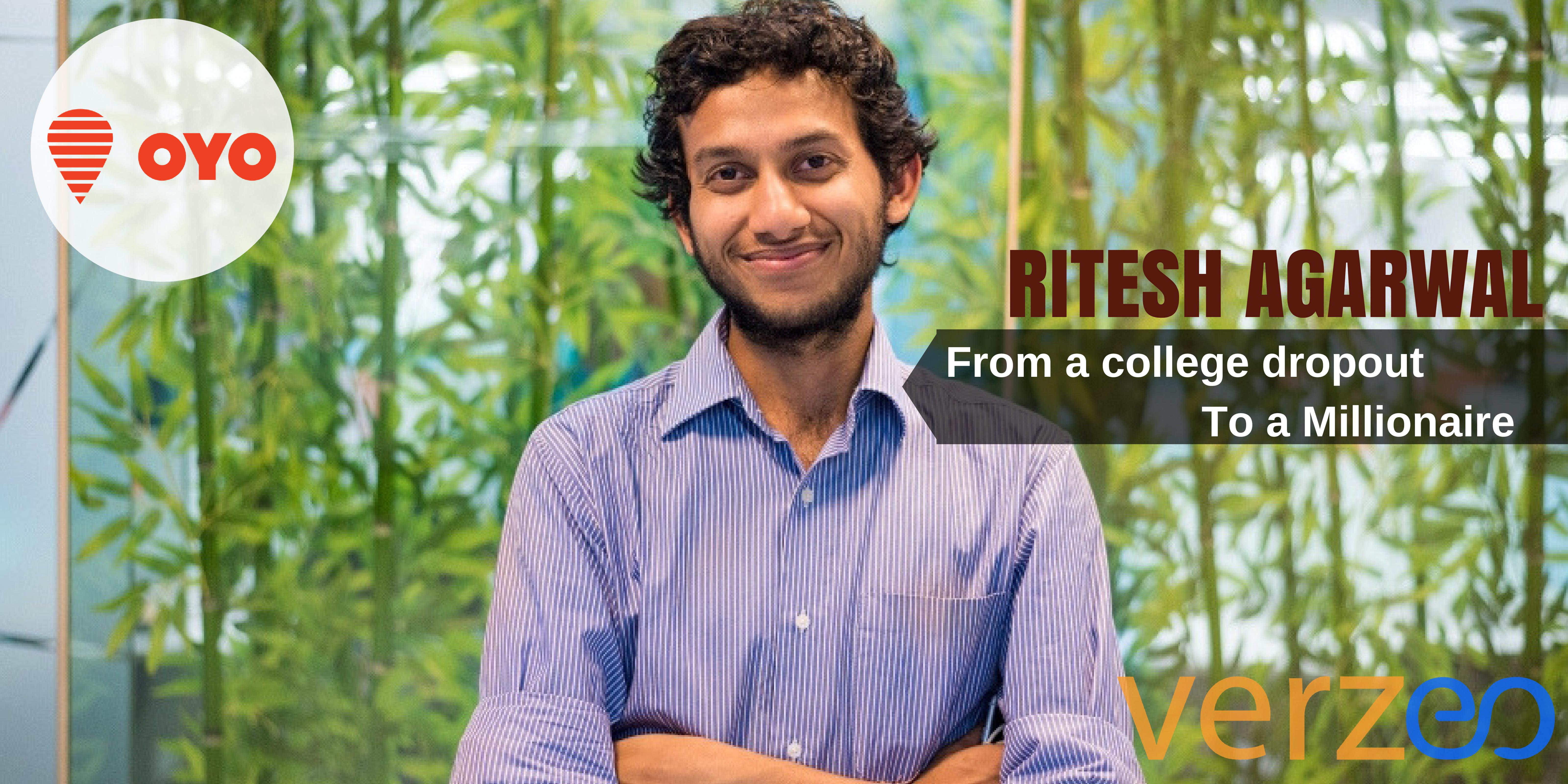 After graduating from the Peter Thiel Fellowship program, Oravel pivoted to Oyo Rooms - a chain of branded budget hotels across several cities in India. We are all aware of OYO rooms which is a very successful start-up and rightly so. OYO Rooms is the country’s largest budget hotel chain with about 1 million rooms in 23,000 hotels all over India.

Oyo doesn’t own hotels, instead, it ties up with certain hotels and acquires some rooms to be given out to people who want to avail OYO services. It focuses on standardizing the hotels in the non-branded hospitality sector. Oyo Rooms is a very successful venture as it has managed to solve the issue of affordability, cleanliness, and availability of budget hotels across all Tier-I and Tier-II cities in the country.

Budget room aggregator Oyo Rooms is one of the most funded players in its space with funding from Sequoia Capital and Softbank.

The story of Oyo Rooms almost reads like a fairy tale; helmed by 26-year-old Thiel fellow Ritesh Agarwal, an investigative feature that dug deep into its origins found plenty of cracks in the founder's narrative. Our perceptions of the startup were tempered by several unhappy accounts on blogs and many such personal experiences from Twitter users.

The teenage boy – Ritesh Agarwal is the young Founder & CEO of OYO Rooms – the fastest-growing branded network of hotels offline & online. A college dropout, who once wanted to sit for an engineering exam, Ritesh today heads among the most valuable start-up by a person who never studied beyond school. The journey of our hero began rather early than normal!

Ritesh was born to a business class family in Bissam Cuttack in Orissa and attended the Sacred Heart School in Rayagada, Orissa. During the growing up days in Rayagada, Odisha, it was all about fun and learning for him but his ways were rather unconventional from those of other kids. His fun elements included screwing around with the computer and trying hard to find opportunities to make mistakes so that he could learn new stuff. And doing that he gained a keen interest in software!

This started with the idea of it, moved on to know about it and then the hunger just went on increasing. To quench his thirst, he borrowed his elder brother’s books for programming. Some of the basic languages like Basic and Pascal were taught in the school itself and the rest he managed to learn from Google. He even sold sim cards to survive, afraid his family would end his entrepreneurial dreams and summon him back home to Odisha if they knew of his struggles.

In Kota(Rajasthan), where he was ostensibly preparing for his IIT entrance exams, Ritesh says he couldn't wait every weekend to slip out to Delhi and meet those doing their own thing. This 19-year-old had traveled for months staying at budget hotels, attended customer calls every day, and immersed himself in every possible experience to learn about budget hotel customers and their expectations. That was the kind of on-the-ground learning that helped him pivot Oravel to Oyo.

Want to be the next Ritesh Agarwal? Learn the in-demand skills to launch your own startup.

Starting of as Oravel and launching into OYO

Ritesh started his entrepreneurial journey when he was 17 years old. He dropped out of college and launched his first start‐up Oravel Stays Pvt. Ltd. in the year 2012. Oravel was designed as a platform to enable listing and booking of budget accommodation. Being an avid traveler, he soon realized that the budget hospitality sector lacked predictability.

Therefore, he pivoted Oravel to OYO Rooms in 2013 with the key proposition of offering affordable and standardized accommodation. The company is backed by investors like the Softbank Group, Greenoaks Capital, Sequoia Capital, and Lightspeed India and is one of the leading startup unicorns in the hotel industry.

Ritesh Agarwal was selected for the “20 under 20” Thiel Fellowship in 2013. The Thiel Fellowship is a two-year program wherein fellows receive $100,000 and mentorship from the foundation’s network of tech entrepreneurs, investors, and scientists. With a current valuation of nearly $10 billion, OYO Rooms do nothing out of the box but provide travelers with the coolest yet cheapest efficient, young, standardized rooms with no add-ons attached to it!

Personally, Ritesh with his common-man qualities of wheatish, tall, thin, scruffy look, isn’t easy to find in a crowd. But mind you, this is also the look of the founder who puts in 16 hours a day to make his dream come true and has been through a wild journey from as far back as he can remember, to get this ahead.

Ritesh Agarwal, a successful entrepreneur is only 26 years old and has several accolades to his credit. Born to a humble family in Cuttack, his journey of becoming a successful entrepreneur wasn’t a very smooth one. In fact, in the era of start-ups, he had to face certain difficulties in trying to battle it out to make his unconventional idea work.

To pursue his passion for becoming an entrepreneur, he enrolled in the Indian School of Business & Finance, Delhi but left college mid-way to start his own company. He was hesitant about his decision but from the beginning, he was very clear about what he wanted to do and took some tough choices to accomplish his dreams.

He has traveled all over the country and during such travels, discovered the problem with budget hotels. At the age of 17, he launched Oravel travels, modeled after Airbnb, which later branched out to become OYO rooms. Soon he discovered that the problem with budget hotels was bigger than just availability, so, to counter other issues, he launched OYO. 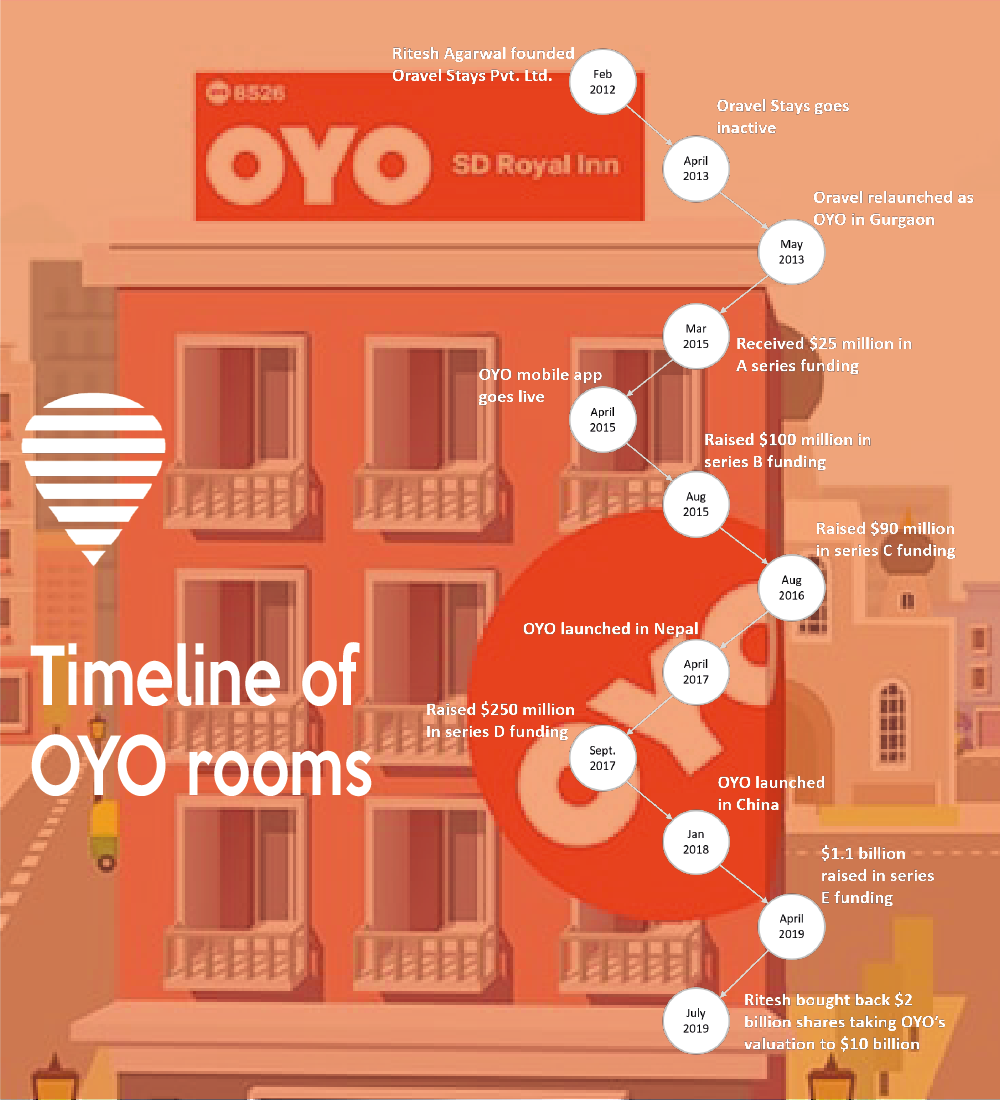 Counting some of Ritesh’s & OYO’s achievements

The very year he launched Oravel travels, he was nominated for the Thiel fellowship. The fellowship is designed by Peter Thiel, the founder of PayPal, and provided a college drop-out, less than 22 years of age, a sum of $100,000 to pursue a start-up dream. Needless to say, he’s the only Indian to receive it.

Ritesh Agarwal who is merely 26 years old, has certain awards and credentials to his name, some of which are:

At a young age, his book- A complete Encyclopaedia of top 100 engineering colleges, was published and soon became a best seller.

Agarwal started coding at the tender age of 8 and the age of 16, he got a chance to be one of the 240 students who were a part of an Asian camp held at the Tata Institute of Fundamental Research. He was the youngest speaker in the panel of Think EDU panel,2014 and is a constant at VCCircle events

In 2014; the company raised Rs. 4 Cr from Lightspeed Venture Partners (LSVP) and DSG Consumer Partners, at a pre-money valuation (valuation of a company before investment or financing) of Rs 14 Cr. What motivated Ritesh, even more, was that by now the company was clocking gross bookings of more than Rs.1 Cr. per month.

Since then; OYO Rooms has gone on to become India’s first technology-driven network of standardized branded budget hotels and has also widely expanded its presence to 20,000+ hotels and more than 1 million rooms in 337 cities like Delhi, Gurgaon, Noida, Bangalore, Mumbai, Pune, Goa, Jaipur, Hyderabad, etc.

Additionally, their OYO Rooms mobile app has been downloaded more than 10 million times and more than 5 million bookings have been made so far. The app ranks amongst the best-rated apps on Google Play Store and has also been listed as one of the top three apps in the ‘Travel & Local’ category.

The company has also raised another $25 Million from Lightspeed, Sequoia and others. In the latest news, OYO’s founder Ritesh Agarwal has purchased $2 billion in shares from venture capital firms Sequoia Capital and Lightspeed venture partners.

Liked what to read ?

Read more about other startups like Flipkart, redBus.in etc. at Verzeo’s startup stories.